What is a “linear actuator”? It is actually a simple stepper motor with a built-in leadscrew to directly convert rotary motion in form of discrete steps, into linear motion. Achieving linear motion internal to the motor eliminates the cost of designing a separate transmission mechanism in the system.

A linear actuator could use the basic can stack stepper motor design with step angle of either 7.5 or 15 degrees. The rotor magnet sits on a thermoplastic nut captured between two ball bearings secured in the end caps. Depending on the level of integration required, a linear actuator can be captive or non-captive. 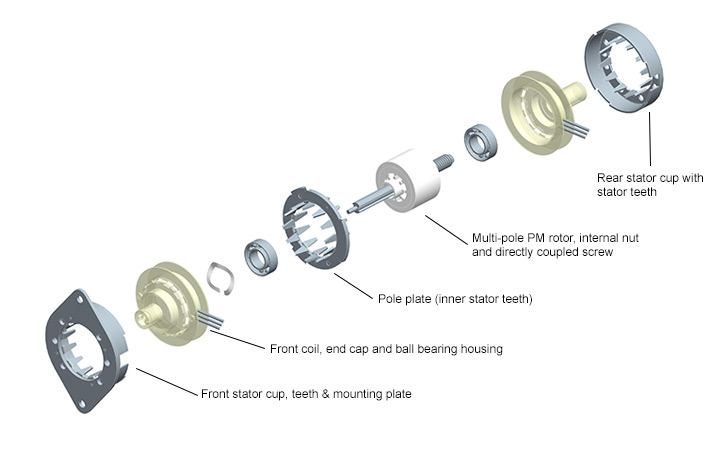 In case of non-captive actuators, the resultant motion is linear but the screw also rotates, and anti-rotation is within the customer’s application.

For captive actuator, the shaft is made of two pieces – “rear” and “front” sections. The rear section is a leadscrew and rotates through the nut, whereas front section is a grooved shaft that engages with a “butterfly” plastic end cap and acts as an anti-rotation device.

The resultant motion for a captive actuator is pure linear motion.

As the step error in a linear actuator is non-cumulative, such an error does not get carried forward from one step to the next. Thus, high accuracies are achieved across long or short travel distances eliminating the need for costly positional feedback devices such as encoders. Motors can be operated in single stepping, half stepping or micro stepping modes leading to improved resolution and quieter operation.

Linear actuators are a perfect fit for applications that require linear motion in a compact package size. Portescap’s team of design engineers can customize to exceed your motion performance specifications and simplify your design through the elimination of mechanical components such as gears, belts and separate threaded shafts or screws. For this reason, Portescap is often chosen by many of today’s leading device manufacturers such as Medical (syringe pump, pipettes, analyzers, lab instruments), Stage lighting,  Security and access (door locks), HVAC valves, Industrial automation (adjustment mechanism), Telecommunication (antenna positioning), etc