What is the need for new gearing technologies?

Miniature motion technology demands flexibility as well as compactness with higher power and efficiency. Conventional gear technologies have some limitations which restricts the development of new concepts. One such new concept is a “Differential Compact Drive” which differentiates with other concepts in such that it provides high reduction, high efficiency, lower noise, and a compact length gearbox. Before reviewing the advantages of this new concept lets first review the limitations of Conventional Planetary systems.

There are three basic forms of an epicyclic gear train - (a) planetary (ring gear fixed), (b) star (carrier fixed), or (c) solar (sun gear fixed). In most of the common epicyclic applications the ring gear fixed, and carrier is output, and sun gear is the input to planetary gearbox as shown in Figure 1.

Generally planetary designs give several advantages over different types of gearing like compound, bevel, worm and worm, etc. But there are also some limitations such as Single-stage planetary gearhead ratios ranging from 3:1 to 10:1. Gear ratios cannot exceed 10:1 because pinion gears become very small. Gear ratios greater than 10:1 are possible with an additional planetary stage, although this normally increases length and cost. Planetary designs also cannot have ratios less than 3:1 because then the pinion and outer ring gear would need to be nearly the same size, leaving no room for the planet gears. Ratios between 4:1 and 8:1 provide the best combination of pinion and planet-gear size, performance, and life. 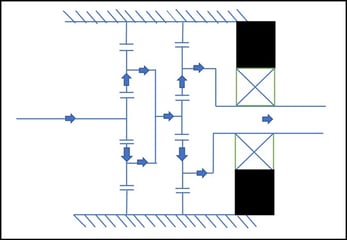 The concept of a Differential Compact Drive is focused on higher speed reduction and torque enhancing mechanism with higher reduction ratio, achieved in a compact length which utilizes a 2-stage epicyclic gearing system. This special arrangement consists of a 2-stage split ring type epicyclic gearing system as can be seen in Figure 2. The input stage ring gear is fixed, while the output stage ring gear is rotating and connected to and drives output shaft. The reduction ratio and power output achieved with differential compact drive is much higher than the conventional 2-stage planetary gearbox. Typically, the reduction ratio achieved with differential compact drive can be more than 300:1 in 2 stage arrangement but in conventional planetary designs it may require 3 or 4 stages of gear systems. 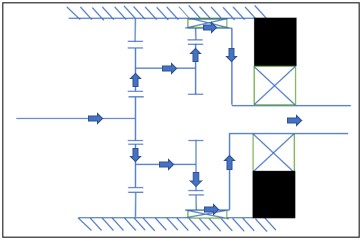 Most industrial applications and equipment within the areas of Robotics, Industrial Tools, and Medical Infusion Systems always strive for compact length, higher efficiency, and low noise of a gearbox solution. The new concept of Differential compact drive design could be the best candidate to meet all the requirements and fulfil the needs of the industry and benefit the users with competitive advantages in all aspects.